The streets are decked out for Christmas and you want to decorate your home and your business too, and to go further in your social media accounts, websites, and merchandising. That’s why you need to get the best high-quality Christmas images for your creative projects, to improve your posters, cards, personalized invitations, social media posts, infographics, or presentations among many others, using Freepik assets. Furthermore, you can also make use of Christmas icons, animated icons, and stickers from Flaticon for your educational projects, small businesses, or for a big multinational company.

In the meantime, webmasters, UX and UI designers work for a better user experience while graphic designers may be looking for Christmas icons for interface designs for apps, websites, and landing pages.

In addition to all these resources, you’ll also find a downloadable freebie for you to get some inspiration. Download this new Flaticon freebie that includes many Christmas icons and stickers to spread happiness around your designs.

And don’t forget, if you have a Premium account, you’ll have access to premium resources including content with a commercial license. Get everything you need with a very reasonably priced monthly subscription which only gets even more reasonable when choosing an annual subscription. Don’t miss out

How much do you know about Christmas symbols?

There are just a few days left until Christmas and the streets show lovely decorations around the globe. According to Christianity, Christmas is the commemoration of Jesus Christ’s birth, but it is not celebrated in the same way everywhere.

Apart from those that celebrate Christmas due to its religious nature, Christmas symbolism has become a visual standard for everything related to New Year’s celebrations. For those who don’t consider themselves as Christians, Christmas motifs represent happiness, sharing good moments with your family and friends, all those little things that make people happy. In some places, they are used as symbols that represent New Year’s Eve and the parties with friends and family.

Learn a little bit more about the different Christmas symbols and their mesmerizing stories. All of them are included in the freebie that you’ll find here.

Santa is based on the history of Saint Nicholas around the year 285 AD. Saint Nicholas was born and lived in Turkey, and the stories about his life narrate how he helped kids and poor people. His influence spreaded across Europe, even after the Renaissance period, when saints lost part of their historical weight. The story of Saint Nicholas reached the United States because of the Dutch immigrants in the 19th century, and Santa became one of the most representative motifs of Christmas.

People in Europe and English-speaking countries have been baking gingerbread men in their kitchens for centuries to celebrate Christmas. There is a famous tale that narrates the story of a brave gingerbread man that escapes from grandma’s oven when she was trying to bake him before a Christmas dinner. Nobody knows about the origins of the tale, but eating gingerbread men is one of the most typical Christmas traditions. Did you know that the way in which you eat gingerbread men tells a lot about your personality?

The history behind the creation of candy canes remains a mystery. There are many theories, none of which seem to stick. What is true is that eating, sharing, and decorating these candy canes are very typical Christmas activities. Supposedly, candy canes were completely white and they tasted like sugar at first. Later on, people added red colorant and that typical mint flavor. Candy canes got their curved shape at the beginning of the 20th century. This is the moment when candy canes became the most iconic type of Christmas candy.

Giving gifts and presents isn’t a Christmas tradition only. There are other festivities when people exchange presents like Hanukkah or Pancha Ganapati. However, on the subject of Christmas gifts, this tradition is very much connected with the story of the three Wise Men. Likewise, Christmas gifts are also associated with the generosity Saint Nicholas shared amongst the poor community.

Christmas trees with garlands of lights

Christmas trees originated in Germany during the 17th century. Before that, many other cultures used pine branches and other perennial trees to celebrate the Winter solstice at the end of December. German immigrants brought the tradition of decorating a Christmas tree to America in the 18th century, but it wasn’t until the mid 19th century that it was common to have a Christmas tree in each home.

A snowman with a carrot nose, a hat, and a black tie is one of the most usual Christmas images, mainly because of its association with the song Frosty the Snowman. The reality is that snowmen have been part of history for millenia. Any place with snow has the potential to make snowmen and when people get carried away with self expression, who knows what ancient people crafted out of pure white snow. Have you ever made one?

Celebrating Christmas with your family, friends, and clients is not the same without Christmas trees, baubles, gingerbread men, or candy canes. That’s why we have prepared a pack of Christmas resources just for you. They are premium and completely free. They include: 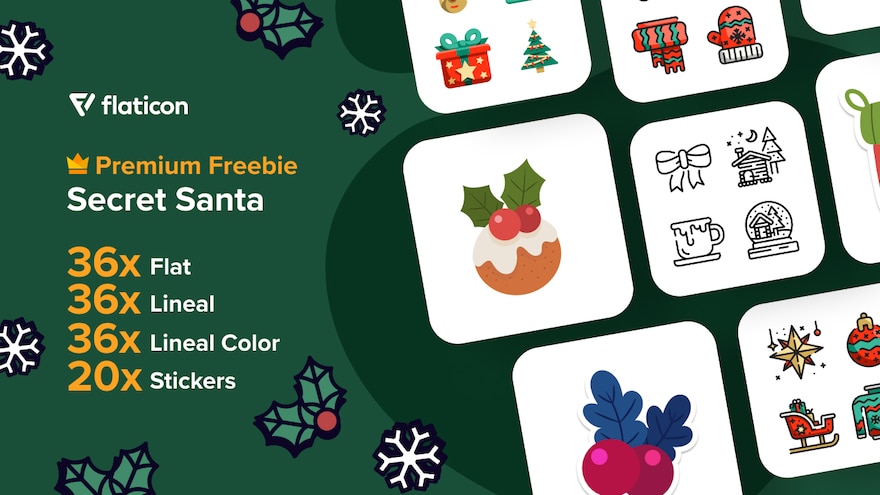 Discover the essential input control elements for your UI designs

By Orana 2 weeks ago

By Orana 2 weeks ago