Happiness Icon: The Origin of Emojis

If you’ve seen the movie Forrest Gump, you’ll remember the scene where Forrest was running and people were asking him for his autograph – someone gave him a yellow t-shirt and Forrest used it to wipe his face. A little face appeared on it and Forrest said, “Have a nice day!” Well, that’s not the real origin story of the yellow smiley face, the hapiness icon.

The origin of the smiley face actually has several versions because the designer who first drew it didn’t patent it. In 1963 Harvey Ball drew the iconic smiley face with oval eyes and a mouth with a Mona Lisa-like smile-for an internal campaign at an insurance company.

Since Ball didn’t patent or copyright the image, numerous other individuals and companies went on to register the brand as their own. Each one generated huge profits by designing stickers, badges and other smiley-face products. On the eve of the International Day of Happiness, which is celebrated every March 20, we invite you to join us as we take a look at the history of the symbol we use every day to represent happiness.

Nowadays, smiley faces and emojis are free to use, as long as you don’t use a specific design of any brand. On Flaticon you’ll find a lot of happy emojis, ready to download and use in your projects!

From smiley face to emoji

You may have noticed that when you type these acronyms on the keyboard “🙂” many messaging services automatically convert it to 😀. The reason behind that is the story of how the smiley face became an emoji.

The smiley face didn’t turn into an emoji instantly. Before emojis, there were emoticons. The first ones were 🙂 and 🙁 created by Dr. Scott E. Falham in 1982.

From these smiley faces, emoticons evolved to include many more versions. This inspired the Japanese designer Shigetaka Kurita to produce the first set of emojis for pagers and cell phones in 1997.

Ironically, the smiley face wasn’t included in that first series. The first smiley face emojis arrived with MSN Messenger in 2003. Unicode and Apple joined in, and the smiley face became the most iconic emoji of all, with many expressions and personalities.

There’s no limit to the use and creativity of the smiley face emoji – it’s simply the best visual tool to share happiness. And just as you use emojis in instant messages, emails and other messages, you can also use them in your designs.

Have you seen The Emoji Movie? Or how about cushions, face masks, and even clothes with emojis? The trends of using emojis come and go in different areas of our lives, and it’s changing all the time. Seeing smiley face emojis everywhere is no longer out of the ordinary.

Happiness is necessary for human well-being, and the existence of smiley face emojis are a great contribution to everyday life.

As the song says, Don’t worry, be happy! And take advantage of our collections like this one to spread happiness with your uncomplicated designs.

Emojis as a social language

The use of emojis in social networks is simply part of the language of the moment. We use symbols instead of words, and many of them even have double meanings. There’s such a variety of emojis that we can communicate with them alone.

The smiley face is no longer just happy, now it can also be sad, surprised, confused, doubtful, crying and much, much more.

Every year, more and more emojis appear on our mobile devices, creating huge possibilities for visual communication. As you know, there’s an emoji for every emotion and on Flaticon you’ll find collections with all of them in the same style, so you can express everything you need to. 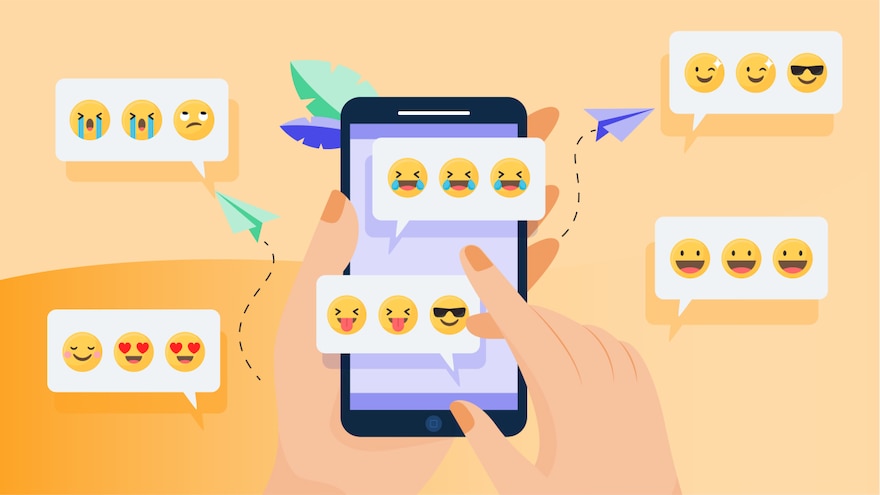 Emojis can also be used as icons in your designs. Whether for a website, a mobile application or a promotional graphic, emoji and smiley face icons add a dose of happiness to any visual project.

On Flaticon you can find smiley face emojis in many styles – from plain colors to multicolored outlines. There are all the most common expressions like the heart-eyed smiley face and other unique ones produced just for Flaticon.

Did you know that July 17th is emoji day? When your clients ask you to design some graphics for them, don’t forget all the emojis at your fingertips on Flaticon.

Download one of our collections and start using it wherever and however you want. Don’t say we didn’t let you know in good time ;).

Surround yourself with nature with Flaticon stickers

By Orana 4 weeks ago

Feminist Icons for Women’s Day. Download them Free for 48h

By Flaticon 3 months ago